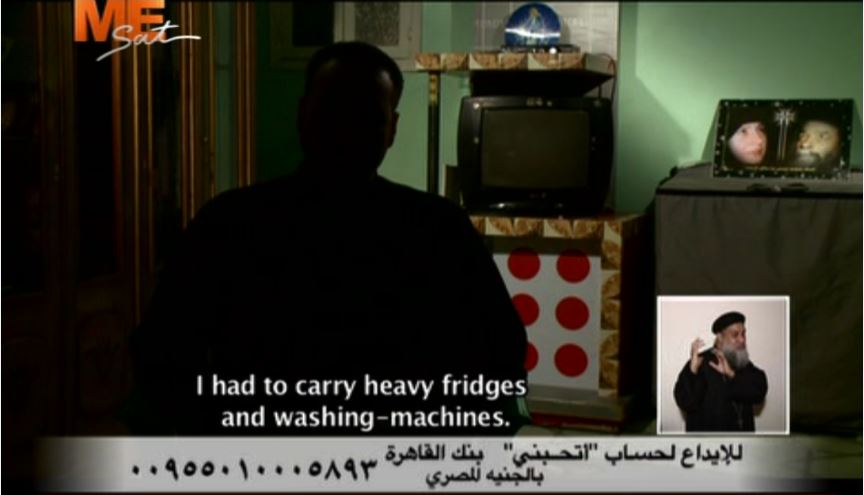 “For God love a cheerful giver”

After graduation in1990, he went to the great city, Cairo; he worked at a store of electrical appliances carrying heavy objects like fridges, washing machines. He worked hard to offer his sisters marriage costs. His job affected his spine. Suddenly he felt something wrong in his back and feel down. His friends took him to the hospital where they told him there was a problem in the fourth and fifth vertebrate. He had to do a spine injection at al-Demerdash hospital. However, he didn’t stop working in order to provide for his family. After getting married in 2007, he got a twin and had to double his effort to provide for his children. He would carry a fridge up to the 10th floor.

Moreover, he discovers that his mother is suffering from cancer and he provided for her operations and medications’ costs till she passed away. He had done the operation needed to fix the vertebrate thanks to his boss who supported him financially. In 20011, on the threshold of the Egyptian Revolution, the owner dissolved the company and travelled abroad. He lived on his pension that was 500 pounds and his brothers helped him as he couldn’t have worked again due to the operation outcomes.

He wishes he could work again but this is not possible as the nerves are pressing over the cords of his back and that lead to imbalance during walking. When the lumbar vertebrae are pressed down he loses control of urination and becomes unable to sit down and that happened several time in the street. His previous surgery failed due to the bad performance of the surgeon that resulted in fibrosis in the fourth and fifth vertebrae and lead to severe pain in the legs that prevent him from sleeping whole nights and inability to stretch the back. He was advised to go another orthopedic who told him that he cannot fix his back as he is suffering from fibrosis in the first, second, fourth and fifth vertebrae.

Once he heard that there is a diagnosis for his case at one of ME sat programs that his case may be an inner tumor or inner abscess and he cannot know anything about his case as the surgeon didn’t tell what his mistake was. He is using a belt and he can do any activity due to the pain in the back. He is in dire need for an operation to fix the vertebrae and it would cost 20000 pounds.

The Need: Undergoing a surgery to fix the vertebrae